Home Blog What is the Difference Between Crohn’s Disease and Celiac Disease? 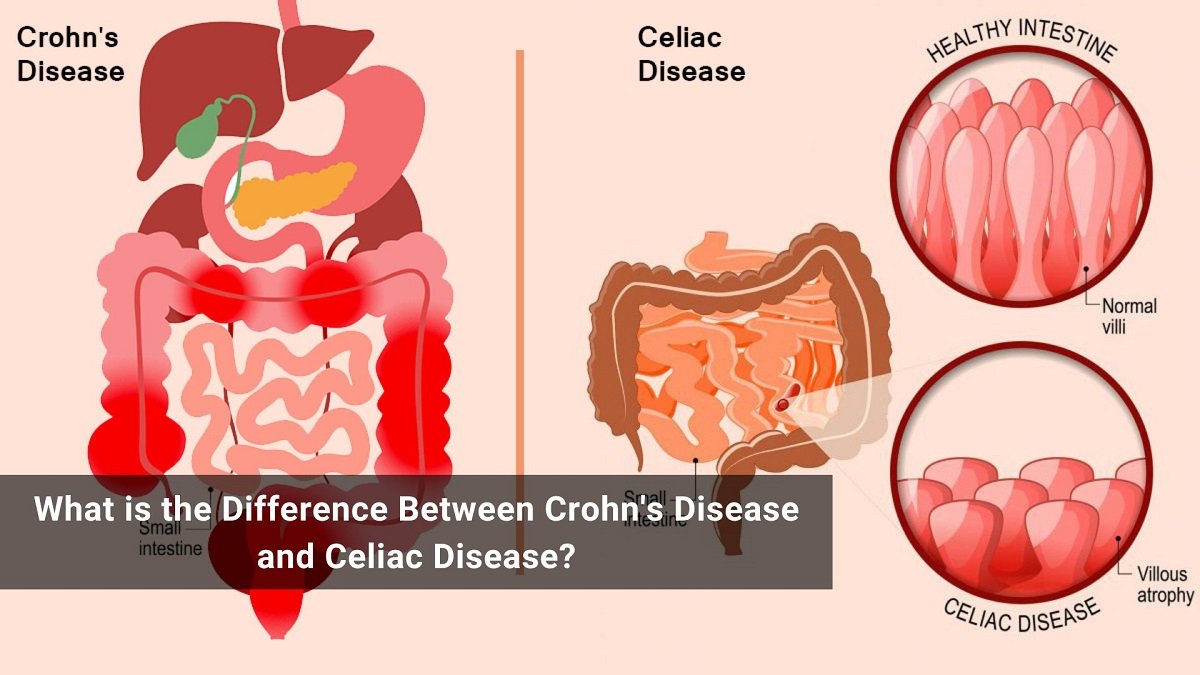 The most common and the most haunting digestive disorders are Crohn’s Disease and Celiac Disease. Both are autoimmune disorders and both affect the gastrointestinal tract. Many find it hard to differentiate between Crohn’s Disease and Celiac Disease as both overlaps a lot in symptoms. Ayurveda refers to these two diseases as Grahani Roga which is the disease of the small intestines. These two are nightmares for sufferers whenever they try to eat the food they desire. Most people confuse one another and often find it difficult to follow a diet or take any precautions.

So, today in this article, we will help you to disclose the difference between them. We will also recommend a super diet that will aid in your Crohn’s disease. Stay tuned till the end. Okay, without any further delay, let’s dive in. Have an insightful read!

Both diseases have terrible effects on the intestines, both are due to autoimmune reactions and research also explains that patients with celiac disease are more likely to have Crohn’s disease than others. Studies also found that they are genetically similar and patients can experience the following symptoms of Crohn’s Disease and symptoms of Celiac Disease mostly on the intestines but rarely on other body parts too:-

Although they coincide a lot in symptoms, the relative causes and the treatment options differ. To be more precise even if people confuse them as one, they are not, they are two different conditions. Okay, let’s also read what those differences are and what you can do to take care of yourself.

Well, that’s a brief about Crohn’s Disease and Celiac Disease, now let’s look into the treatment patterns of both diseases.

Ayurveda explains that celiac disease is due to the eating of incompatible foods and also foods that have gluten. Many patients at IAFA have been successfully treated by Dr. Sahil Gupta using Ayurvedic herbs and also a personalised gluten diet.

To make things easier, we will recommend you to book an online consultation now and talk with our ayurvedic expert Dr. Sahil Gupta and get your therapy now! This is the effective treatment of Celiac Disease.

There is no single therapy that can cure your Crohn’s disease flare-ups. But surprisingly even if you have or don’t have celiac disease following a gluten-free diet may be a relief to your gut and also you can reduce flares. Ayurvedic Remedies focuses on the Deepana of Agni which is the stimulation of digestive fire and elimination of Ama Visha and prescribes those herbs which can relieve gastrointestinal symptoms.

This is an ayurvedic way of treatment of Crohn’s Disease.

A Word from IAFA

Get every clarity with us on Crohn’s Disease and Celiac Disease, by consulting our health expert.

Hey, before leaving, we promised you that we will share with you a highly beneficial diet to reduce the flare-ups of Crohn’s disease. That is a low FODMAP diet. Research suggests that people on a low FODMAP diet have shown more significant results in IBS than others. A low FODMAP is low fermentable, oligosaccharides, disaccharides and monosaccharides and polyols. Off! So much to remember, right?  Well, to put it simply, these are certain types of carbohydrates like sugars, starches and fibres. Stay tuned for another insightful article on a diet plan for Crohn’s disease. We have already covered celiac disease in detail, you can check it out!