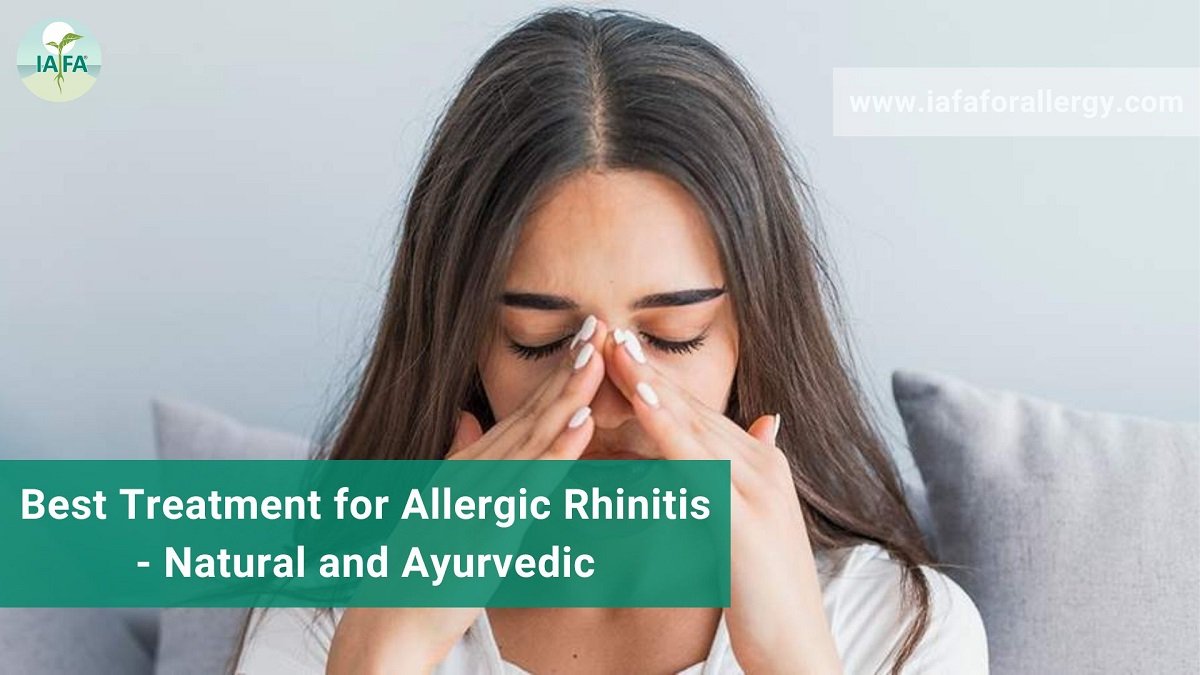 Allergic rhinitis, sometimes known as hay fever, is a kind of pollen allergy. When pollen is at its highest, during pollen season, symptoms start to manifest. One of the causes is pollen from several sources, including weeds, grass, dust, animal dander, and trees. Shortness of breath, watering eyes, Continuous sneezing, and sore throat are all symptoms.

The internal lining of the nostrils prevents foreign particles from entering the body when a person is exposed to any allergens or dust. Inside the nostrils, a thick mucus is formed that keeps allergens from entering. If this obstruction does not happen in a person with an oversensitive immune system, airborne tiny particles may enter the nasal canal, producing irritation and inflammation.

IAFA® provides the best treatment for allergic rhinitis with the help of natural and ayurvedic remedies.

Some common symptoms associated with allergic rhinitis include:

According to Ayurveda, weak immunity and nervous system hypersensitiveness are what produce allergies in the body. Indigestion, smoke, dust, not getting enough sleep at night, feeling sleepy during the day, and being exposed to chilly air, all contribute to allergic rhinitis.

According to the Ayurvedic view, an imbalance between Vata and Kapha is what causes rhinitis, also known as dushta pratishya. A mucus-like substance that is heavy, firm, steady, sluggish, thick, sticky, wet, clear, and cold represents the Kapha dosha. Vata and Kapha in excess produce mucus-like toxins that are hot. These toxins go through the bloodstream and are carried through channels to the body’s weakest areas. The respiratory system is the most vulnerable system of the body in such a situation. Toxins that are warming and mucus-like build up in the respiratory system and cause rhinitis. Allergic rhinitis treatment in Ayurveda involves pure herbs and gives relief to all the symptoms of the condition.

For the most effective combination of Natural remedies for allergic rhinitis, Consult IAFA®. The herbal treatments are made with the highest-quality ingredients and adhere precisely to Ayurvedic principles. These IAFA® herbal treatments are completely pure. These don’t contain any additions, chemicals, or preservatives. These have no negative effects; thus they are secure to use.

IAFA Respiratory Detox Tablet gives people relief from rhinitis illnesses. It was created by experienced medical experts at the Institute of Applied Food Allergy®. The tablet’s herbal ingredients, including Hingu, Surasa, Jivanti, and others, have been shown to have good anti-allergic properties. It also dilates the respiratory system, clears mucus from the lungs, and increases resistance to recurring respiratory infections. These days, it is used to support the respiratory system and regenerate the lungs.

Dosage: 2 Tab twice a day 15 minutes before a meal with lukewarm water.

A patented Ayurvedic mixture for respiratory tract problems, IAFA Respiro Detox Formula is made with 6 Ayurvedic herbs and minerals. When used to treat patients with persistent breathing issues and nasal blockage, the formula’s ingredients Thaleesapathradi choornam and Giloy satva have a significant pacifying effect on the Vata and Kapha energies. Godanti, Abhrak, and other bhasmas are mixed to create the formula. Due to its effective anti-allergic action in disorders including sinusitis and rhinitis, people with a variety of allergic conditions may prefer Respiro detox solution. This product will strengthen the immune system and aid in the treatment of constant respiratory infections.

Dosage: 1 teaspoon twice a day with honey or lukewarm water.

A traditional swaras (herbal Juice) is called Total Care 3X Ras. This medication works wonders for practically all respiratory issues, but it works best for hay fever. The ras contains a potent herbal blend that helps the healthy operation of the respiratory system. Herbs like Satyanashi, Dronapushpi, Sirisha, Bhoomi Amla, Vasa Putapaka, Dughdhika, Yavakshara, and Yashtimadhu are included which are beneficial for allergic rhinitis.

Dosage: 30–60 ml with water once in a day the early morning empty stomach with an equal quantity of water.

Nasal All Clear X Drops is a wonderful natural formulation in the form of drops by IAFA®. It is a blend of six ingredients such as Jyotishmati, Maricha, Pippali, Vidanga, Shigru, Haridra, Nagarmotha, Bruhati, Sariva, Yashtimadhu, Til Thailam. herb Haridra is the most commonest of all the herbs and is commonly called Turmeric. Ayurveda explains it as the most useful anti-allergic, anti-inflammatory, herb. It is nature’s best herbal remedy for hay fever.

Method of Usage: 4-6 drops bilateral nostrils twice a day in the late morning and early evening.

The Ayurveda expert at the Institute of Applied Food Allergy® produced Nasayoga Grutham, which is beneficial and helps to maintain physical barriers among the environmental allergen and nasal mucosa for all Nasal rogas identified by Ayurveda. The formulation is made with herbs like Yashtimadhu, and Go Grutham. These herbs are very effective in almost all upper respiratory problems but have the best result in allergic rhinitis.

Method of Usage: 4-6 drops of lukewarm grutham in bilateral nostrils and 2-4 drops in the navel area twice a day in the early morning and at bedtime.

Allergic rhinitis can be effectively treated by IAFA® through pure natural herbs containing many medicinal properties. So book your appointment now with dr. Gupta to treat your problem of allergic rhinitis naturally.