The scientific experiments conducted by Dr. Gupta’s IAFA have proven the actions of this herb, like antimicrobial, antibacterial, and anti-inflammatory. Changeri has been comprehensively recommended for its actions like carminative, digestion promoting, cure piles, and cure skin diseases. As it is having Kapha and Vata dosha pacifying in nature along with antiallergic action, it is widely used in allergic skin diseases.

Various studies show that liver damage caused by the overdose of paracetamol can be treated by using the extracts of Oxalis corniculata. The phytoconstituents present in the plant helps to reduce serum enzymes such as Glutamate oxaloacetate transaminase, glutamate pyruvate transaminase, Alkaline phosphatase which indicate its hepatoprotective and antioxidant potential. Nowadays Changeri (Oxalis corniculata) is widely used as a remedy for Piles. The juice of Oxalis corniculata is used as an ingredient in relieving insanity. The abundant medicinal properties of Changeri make it one of the most commonly used drugs in both modern and ayurvedic treatments. 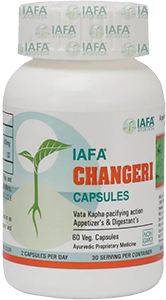 Phytoconstituents naturally found in Changeri (Oxalis corniculata) are Vitamin C, Carotene, Malic acid, Tartaric acid, and C-glycosyl flavanoids. These chemicals aid in the anti-inflammatory, antibacterial, and anti-allergic actions of this herb. The Kapha and Vata dosha pacifying action makes it as one among the favorite herbs for Ayurveda practitioners in treating various allergic conditions.

Changeri also known as “Amlika” due its nature of amla (sour) taste is a creeping weed. Numerous creeping branches on the ground rooted it again to form a new plant. The maximum height of plant is 2 to 3 feet. Changeri is also known as “Teen Pattia” due to its three heart shape leaflet structure. Yellowish color flower grow in cluster. Dark, egg-shaped, and flattened seeds are present in cylindrical capsule-shaped fruits.

Changeri is a perennial herbaceous creeping weed that grow generally in gardens, wasteland, and roadsides in all provinces of India.

Changeri (Oxalis corniculata) is a popular herb, which has undergone various scientific studies in a wide range of conditions. Changeri juice and fine powder have great anti-inflammatory, antiallergic and antibacterial action.

Dr. Gupta’s effort in promoting Ayurveda to all is benefiting thousands of individuals. IAFA is producing herbal products of good quality to treat various conditions. Ayurveda is the only measure that assures natural friendly healing. Dr. Gupta is treating various ailments through using unique pulse diagnoses and unique herbal combinations explained in Ayurveda. A high success rate in disease curing through natural measures is the major aim of IAFA.

Reach us today and feel the unique herbal healing of Ayurveda!!!

Yeast is a living fungus that actively helps in the fermentation of food and drinks. The fungus consumes sugar and...

Tinea or Dermatophytosis, commonly known as ringworm is a condition of the skin characterized by copper-coloured circular or ring-like lesions...

Tinea Versicolor, also known as Pityriasis versicolor is a frequent, benign and superficial fungal infection of the skin. The most...

Brahmi, an acknowledged and few of the most beloved Ayurvedic Herbs is considered one of the greatest Mental Rejuvenators. It...

Shilajit is considered a super substance in Ayurveda, that is known to cure any curable ailment, disease, or condition. Also...

Dr.Gupta’s IAFA has been constantly working on the plantSarpagandha for discovering more medicinal properties the plant. Through the various studies...

Breast milk is the most nutritious and perfect food for babies. Ayurveda as well as modern medicine...

The basic components of nutrients are proteins, carbohydrates, vitamins and minerals.

Having a new born baby in the family will be the happiest yet the most care requiring moment,

Cordyceps(Cordycepssinensis) is a genus of endoparasitic ascomycete fungi containing about 400 species. It is widely used in Traditional Chinese Medicine...

Flax (linum usitatissium) also called linseed is a common fibre crop extensively cultivated in cooler regions of the world. It...

Spirulina is a dietary supplement considered as a super food as it is rich in nutrients. It is a blue-green...