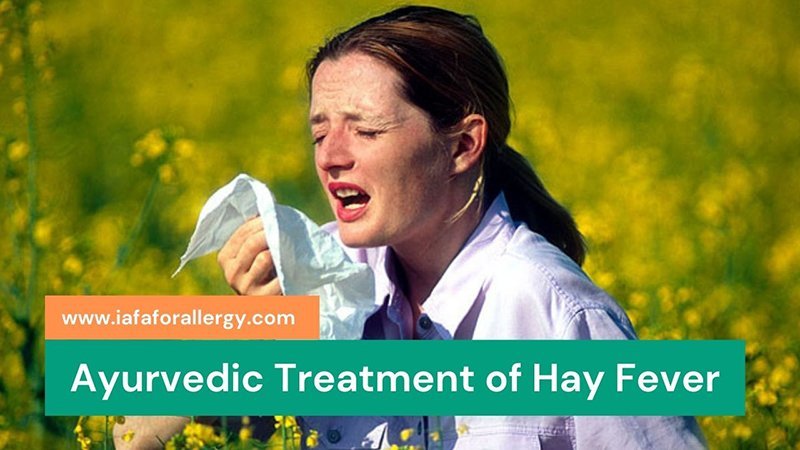 What is Hay Fever?

Hay Fever, also known as allergic rhinitis, causes cold-like signs and symptoms but unlike a cold, hay fever is not caused by a virus. Causes of hay fever includes an allergic response to the outdoor or indoor allergens such as pollen, dust mites, fur, feathers, pet dander etc. According to modern medicine, the symptoms of hay fever can only be managed but it can’t be cured permanently but with the help of herbal remedies of hay fever, it can be treated effectively without any side effects.

What are the Symptoms of Hay Fever?

The most common symptoms of Hay Fever are:

What are the Causes of Hay Fever?

According to Ayurveda, Hay fever is caused due to the imbalance of Kapha and Pitta disorders. The individuals who are deficient in neutralization capacity are more prone to get allergies and hay fever. Vata dosha is responsible for changes in the body that is triggered by seasonal changes in nature in conditions like hay fever. An aggravated or over-stimulated Vata dosha triggered by seasonal or other factors causes hay fever or certain allergies.

Ayurveda also believes that a person with a poor digestive system or weak digestive fire develops toxins in the body due to the poor digestion.

The triggers of hay fever are:

What is the Ayurvedic Treatment of Hay Fever?

Rather than just focusing on the symptoms, Ayurvedic treatment of hay fever focuses on providing nourishment and support to the lungs and the respiratory system.

Treatment of Hay Fever in Ayurveda depends on the type of individual or dosha. While natural and herbal remedies for hay fever are helpful in controlling hay fever, it is better to consult an Ayurvedic physician for holistic and natural treatment as an Ayurvedic physician will first identify the primary dosha. Then he would identify the particular type of dosha that triggers the hay fever. Then he would use this diagnosis to create a personalized treatment plan.

Herbs that are Useful in the treatment of Hay Fever are:

Ginger acts as an anti-inflammatory and therefore removes congestion.

Pippali is an immuno-modulator and has mucus removing properties.

Being an anti-inflammatory, analgesic and anti-biotic in nature, turmeric is quite effective in the treatment as well as prevention of hay fever.

It soothes the lungs and throat.

Holy basil acts as a respiratory system rejuvenator and useful in congestion and runny nose.

It acts as a bronchodilator.

Guduchi is a well-known immunomodulatory herb.

Some diet and lifestyle modifications support the herbal treatment of hay fever. The failure to follow the strict diet can create an imbalance in the doshas. Similarly, an incompatible diet can reduce the effectiveness of baseline treatment.

For natural treatment of Hay Fever, You can contact us or you can directly book an appointment to consult Dr. Sahil Gupta (Registered Ayurvedic Vaidya and Allergy Specialist). He is serving the whole world through his idea of natural friendly healing for all with Ayurveda. He is the CEO and Founder of the Institute of Applied Food Allergy. He has vast experience and deep knowledge of Ayurveda.