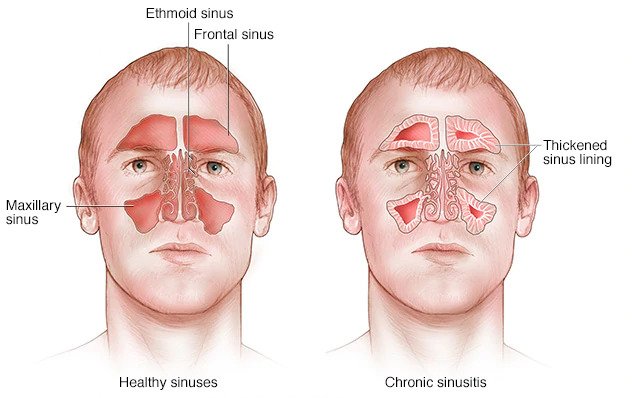 Sinusitis aspergillosis currently constitutes the most common cause of opportunistic fungus infectious in immunocompromised patients [1]. Any type of paranasal aspergillosis may progress to a more aggressive disease illustrating the importance of early recognition of this increasingly encountered disease. There is no direct correlation for aspergillosis in Ayurveda. On close observation and detailed analysis of the clinical features and upasaya and anupasaya in patients, it can be correlated to dushta pratishyaya (chronic sinusitis) and there is tridosha dushti with kapha predominance which plays a  major role in pathophysiology. Therefore the aim of treatment is to remove the dosha dushti, preventing further vitiation and promoting the nourishment of dhathus. The case study being presented is of a 48yr old male patient suffering from aspergillosis. Nasyakarma (installation of medicine through nasal passage) is used as the best choice of treatment along with suitable internal medications. The radiological results revealed the healing process of the soft tissue and there was much symptomatic relief for the patient.

The term “Aspergillosis” refers to an illness due to allergy, airway or lung invasion, cutaneous infection, or extrapulmonary dissemination caused by species of Aspergillus. The most frequent site of human infection is the lung. Sinusitis is a common disorder affecting approximately 20% of the population at some time during their lives. Fungal sinusitis constitutes 6-9% of all rhinosinusitis. Aspergillus is the most common fungus affecting paranasal sinuses Worldwide, A. fumigatus is the most common species, followed by A. flavus. The maxillary sinus is the most common sinus to be affected [2].

Fungal infections of the paranasal sinuses need to be recognized in order to avoid significant mortality and morbidity. Diagnosis of paranasal sinus aspergillosis can be made by history, clinical examination, radiography, nasal endoscopy, and additional tests for allergy, aspirin sensitivity, bacteriology, and pulmonary function tests [3].

According to the Ayurvedic perspective, its features can be correlated to Dushta prathishyaya (chronic sinusitis) in which severe headache, nasal obstruction, heaviness, altered olfaction, nasal congestion, mucous production, altered secretion, and blockage are the chief events. Since it is a tridoshaja condition with kapha predominant symptoms, the ayurvedic approach of management is multifaceted and can involve a combination of detoxification processes through samana (palliative) and sodhana (purificatory) mainly using tikshna (sharp), ushna (hot), kaphahara (nature of pacifying kapha) dravyas.

With the objective of understanding the better pathogenesis of the disease, the author presents a case report.

Figure 1.- Extra-oral photograph showing swelling on right side of face

After treatment patient got symptomatic relief in May 2020 and again NCCT  P.N.S imaging (MRI) was repeated Dated on 30/05/2020 resulted in

On 11/6/2020 treatment continued for a month to attain complete recovery as well as to add rejuvenation. The rejuvenation therapy will guide the process of fast recovery to the internal tissues along with improving the immune system.

In Ayurveda as Dushta pratishyaya (chronic sinusitis)  is a chronic condition of Dosha accumulation in particular nasa (nose) and shira (head); which happens mainly due to sanga (stagnation) type of srothodushti [4]. Oral drug administration like Arogyavardhini vati helped in the actions like  pachana (digestive), dipana (enkindles digestion), pathya (wholesome for channel), mala shuddhikari (cleaning of waste materials from body), increase kshudha (appetizer), Sarva roga prashamani helped in reduction of inflammation and infection [5]. Drugs like charngeri (Oxalis corniculata), satyanashi (Argemone mexicana), bhumiamla (Phyllanthus niruri), sireesha (Albizia lebbeck) etc. having pachana (digestive) action helped in relieving nasaavarodha (nasal obstruction) due to oedema and nasasrava (nasal discharge) due to infection and overactivity of mucous secreting glands. When both inflammation and infection are checked; the sinuses get proper drainage and ventilation. As a consequence shirshoola (headache) was reduced.

Anu Taila works as strotoshodhaka (cleansing of channels) due to its katu (pungent), tikta (bitter) rasa, laghu (lightness), ruksha (dry) guna, ushnavirya (hot potency) and katuvipaka (bio-transformative phase of rasa) [6], it possesses a good spreading capacity through minute channels. It increases general and local immunity as it is indriyadardhyakaratva (strength to sense organs), balya (enhance strength), brimhana (improves nourishment), preenana (nurturing body). This immunomodulation will reduce the inflammatory process in the nasal cavity and sinuses. The drug cause local irritation which liquefy purulent discharge and ultimately expelled out. Bacteriostatic property of ingredients will arrest the secondary infection.

Rasayana (rejuvenative) preparations were selected for internal medication, as it is indicated for peenasa (Catarrh) and also having an anti-inflammatory and immunomodulatory effect.

We can conclude that Nasya along with oral medication is effective in the management of aspergillosis which was not much relieved by allopathic medical intervention. After the completion of the initial stage of treatment, the patient must be given Rasayana treatment (rejuvenation measures like intake of Brahma Rasayana, Chyavanprasham, etc.)  to improve the immune system.

Ayurveda has its own treatment modalities and Rasayana therapies to increase the immune power of the body and thus avoiding the recurrence of the disease. With the ayurvedic management by Dr. Sahil Gupta at the Institute of Applied Food Allergy®, the patient got relief from the disease and could skip the burden and risks of surgeries.

For the complete cure of any Fungal infections OR Allergies, which are having chronic nature can be successfully treated through Ayurveda.

Reach IAFA and feel the difference!!!