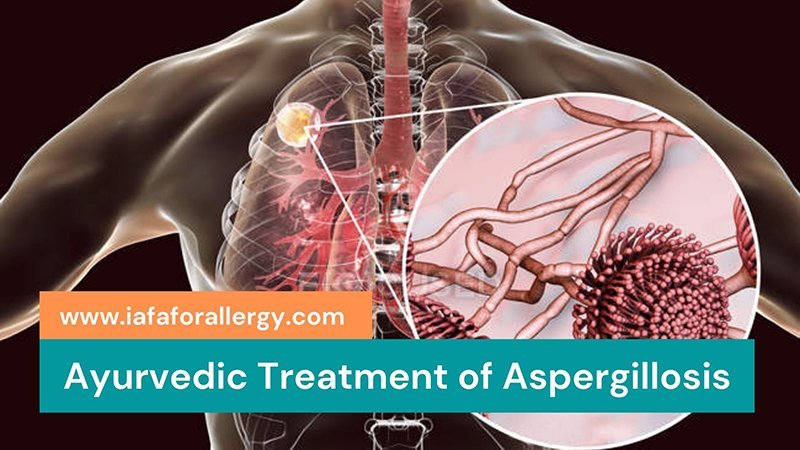 Aspergillosis is an allergic reaction caused by various kinds of molds. It refers to an illness caused due to allergy, airway or lung invasion, cutaneous infection or extra pulmonary dissemination caused by species Aspergillus. Most strains of this mold are harmless but a few causes serious illnesses in people with weakened immune system or in cases of underlying lung disease or asthma.

It is characterized by an exaggerated response of the immune system to the fungus.

What are the Symptoms of Aspergillosis?

The illnesses resulting from aspergillosis infection usually infects the respiratory system. The symptoms are:

What are the Types of Aspergillosis?

Types of Aspergillosis are:

Certain conditions of lungs such as tuberculosis, sarcoidosis etc. can cause the formation of cavities (air spaces) in the lungs. When people suffering with lung cavities get infected with aspergillosis, fungus fibres may find the way into the lungs cavities and grow as tangled masses there.

Symptoms of Aspergilloma are:

This is the most severe type of aspergillosis. It occurs when the infection spreads rapidly from the lungs to the brain, heart, skin or kidneys.

Other Types of Aspergillosis

Aspergillosis can invade other parts of the body as well. When it affects sinuses, the symptoms are:

How Aspergillosis is Diagnosed?

Aspergillosis – According to Ayurveda

Meaning: The vitiated Pranvayu combines with deranged Kapha dosha in the lungs which causes obstruction in pranvahasrotas. It results in gasping, laboured breathing and respiratory distress. This disorder is called Shwasa roga. According to Master Vagbhat, amashya (stomach) is the origin of this disease. The srotas (channels) involved here are prana, anna and udakavaha and the vyaktasthana is uras (thorax) which happens because of obstruction of normal movements of Vata by Kapha dosha.

There is no direct correlation for aspergillosis in Ayurveda but according to the symptoms and close observation, aspergillosis can be correlated to Shwasa and Kasa Roga in which severe headache, nasal obstruction, mucous production, nasal congestion and blockage are the common complaints. It is caused due to the vitiation of all the three doshas mainly kapha dosha.

For strengthening the immune system, Rasayana Chikitsa is done which prevents recurrence of the disease.

Some of the Herbs that are Useful in Aspergillosis

Satyanashi is commonly known as Mexican poppy. In Dhanvantri Nighantu, it is categorized under Guduchyadi Varga. Satyanashi herb helps in mobilizing the imbalanced doshas. It is indicated in toxic conditions.

Dronapushpi is commonly known as Guma. This herb is useful in giving strength to the weak digestive fire. It also has the properties to scrape the sputum out therefore it is scraping in nature.

Bhoomiamla is appetiser, anti-hepato toxic, laxative in nature. It is indicated in the liver, asthma and chronic respiratory disorders.

Dughdika is commonly known as Asthma plant. This herb is used in the treatment of diarrhoea, dysentery, asthma, bronchitis and other respiratory disorders.

Yavakshar is an Ayurvedic medicine which is an alkali preparation of wheat plant of barley. It is useful in disorders of digestion such as malabsorption syndrome, bloating, constipation etc. It is also indicated in cough, obstruction in throat etc.

Yashtimadhu is commonly known as licorice. It provides strength and immunity and considered as an excellent remedy in throat disorders as it is a good expectorant, expels phlegm from lungs and heals respiratory disorders.

From ancient times, tulsi has been used to support respiratory function. This herb has miraculous properties.

It is one of the best herbs that boost immune system due to the presence of bio-flavonoids and anti-oxidant compounds.

As per ayurveda, since from ancient time Vaidya’s or Ayurveda acharya used to prescribe herbs in swaras form as a first line of treatment. Swaras means high potency herbal extracts in liquid form when administrated orally acts as an antidote in chronic ailments. IAFA Total Care 3X Ras is a swaras that contains all herbs mentioned above for the treatment of Aspergillosis. This swaras provides total care of the body by immunize to fight against aspergillosis infections naturally and effectively treat respiratory system ailments without causing any adverse effects.

Thus, aspergillosis can be successfully treated through Ayurveda measures.