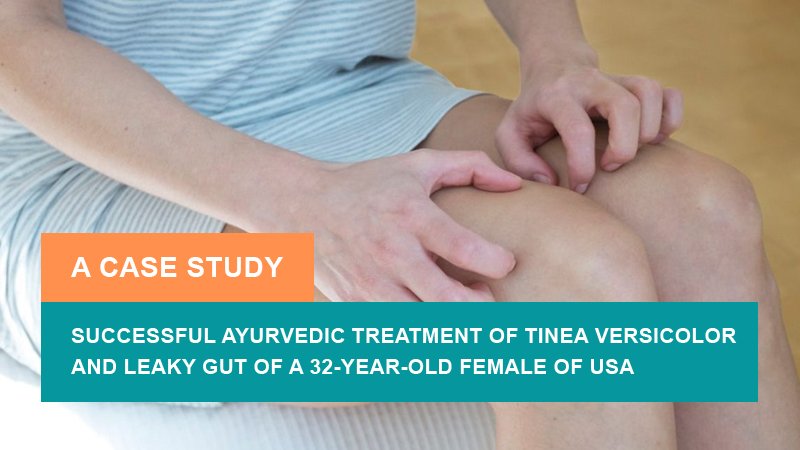 The gut microbiome participates in vital processes including digestion, energy, homeostasis and metabolism, synthesis of vitamins and other nutrients, development, and regulation of immune function, etc. It also contributes to the production of numerous compounds that enter the blood and affects the various tissues and organs of the body. The scope of Ayurvedic treatment to address conditions that are regarded as incurable in modern medicine is also discussed in the present blog. The treatment employed by IAFA® was purely based on the principles of Ayurveda.

A healthy gastrointestinal system is crucial to the overall health of the body. If the mucosal integrity is compromised, leaky gut syndrome will result in the formation of Ama, which can disseminate and initiate disease processes throughout the body. Tinea versicolor is a common skin rash caused by the overgrowth of yeast over the skin surface resulting in uneven skin tone, and scaling which is non-contagious in nature. The generally used medication in modern medicine for the same includes anti-fungal i.e., ketoconazole which may lead to recurrence. A 32-year-old female from the USA was approached for Ayurvedic treatment of tinea versicolor and leaky gut syndrome at IAFA®. The patient had tried every western medicine and spent dollars on the treatment and investigations over the past 3 years but nothing worked. At IAFA®, the treatment was started under the supervision of Dr. Gupta after ascertaining the samprapti (pathogenesis) and the involved dosha. The line of treatment was adopted in terms of mitigating the doshas and purificatory therapy which helped in arresting the progression of the condition and resulted in the successful treatment of leaky gut syndrome and tinea versicolor. The patient was back to her normal routine without any sign of relapse. The outcome was a combined effect of both shamana and shodhan chikitsa along with pathya sevana.

Healthy cellular morphology in the gastrointestinal tract, including proper functioning of the villi and tight cell junctions, allows only fully digested material to be absorbed. The cellular damage resulting in altered villi and compromised cell junctions only permits the absorption of incompletely digested material. This altered intestinal permeability is known as “Leaky Gut Syndrome“. It can lead to increased cytokine production and propagation of inflammation within the intestine. It can also result in food allergies, malnutrition, toxic overload, etc.

Leaky Gut Syndrome – According to Ayurveda

In Ayurveda, there is a concept of Ama production. Ama (toxins) can accumulate at susceptible areas in physiology, which vary from patient to patient. It is produced from improperly digested material due to an imbalance in Agni (digestive fire). This Ama (toxic material) can be viewed as a foreign substance by the body and the immune system can react by forming antibodies to it, giving rise to antigen-antibody complexes and resulting in immune disorders.

Tinea Versicolor – According to Ayurveda

The fungal infection like tinea versicolor occurs due to an imbalance in the kapha and vata doshas. The toxin accumulation gets into the deeper layers of the skin affecting the rasa (nutrient plasma), mamsa (muscles), rakta (blood) and lasika (lymphatic tissues). The toxins accumulated at such levels further aggravate kapha and vata doshas resulting in fungal infections like tinea versicolor.

As per the patient’s clinical history, the patient was having the following symptoms:

The above treatment and diet plan continued for 3 months. Herbal remedies for detoxification and deepan-pachan (stimulating digestive fire) were administered. Care was taken not to consume the known allergic food. The patient was feeling much relief gradually.

After 3 months of treatment, the patient felt significant relief in the signs and symptoms of tinea versicolor and leaky gut syndrome.

The quality of life was improved significantly and the patient is enjoying a normal healthy life with no exacerbation.

The patient was completely satisfied with the treatment and left IAFA® with a happy note. Below is a Happy Note from our patient: 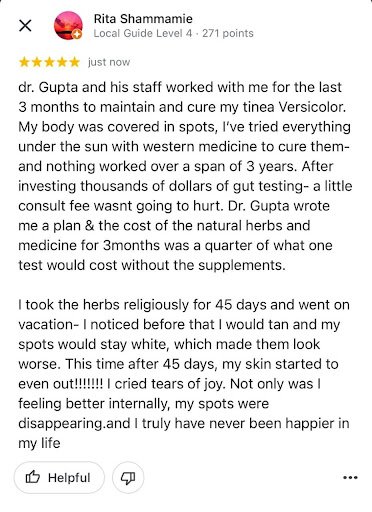 “Dr. Gupta and his staff worked with me for the last 3 months to maintain and cure my tinea versicolor. My body was covered in spots, I’ve tried everything under the sun with western medicine to cure them and nothing worked over a span of 3 years. After investing thousands of dollars of gut testing – a little consent fee wasn’t going to hurt. Dr. Gupta wrote me a plan & the cost of the natural herbs and medicines for 3 months was a quarter of what one test would cost without the supplements.

I took the herbs religiously for 45 days and went on vacation – I noticed before that I would tan and my spots would stay white, which made them look worse. This time after 45 days, my skin started to even out!!! I cried tears of joy. Not only was I feeling better internally, my spots were disappearing and I truly never been happier in my life.”

The patient showed a good response in a short span of time. The treatment modalities helped in arresting the progression of the condition and complete healing. All other associated signs and symptoms were also resolved completely. Follow-up also revealed no signs of relapse. If you want to opt for natural food intolerance treatment, yeast allergy cure, tinea versicolor treatment, feel free to contact us.