Nasal polyp is a chronic inflammatory disorder affecting 1-4% of the general population. These are characterized by fleshy benign growth that develop in the mucosal lining of the nasal passage and paranasal sinuses. It is known to have associations with asthma, infection, allergy, cystic fibrosis etc. The medical management of nasal polyp and sinusitis is aimed at relieving the symptoms until surgery can be arranged but due to the nature of nasal polyposis as an inflammatory disease of the mucous membrane, surgery cannot be expected to cure the disease.  In Ayurveda, this condition is closely related to Nasa Arsha which is a Kapha-Vata Vyadhi located in Urdwanga which is the site of Kapha dosha. This blog presents a case study of a 39 years old female patient who approached IAFA having  symptoms – sinus pain in the right maxillary with headache, nasal polyp, recurrent ear pain with itching in right ear. She took modern, homeopathic and ayurvedic treatments but there was no relief in her condition. She approached IAFA on 13th January, 2022 via online consultation. At IAFA, an approach was made to treat the patient by sthanika, shodhan and shaman chikitsa with a positive clinical response. This study aimed at introducing a new treatment modality which is a non-invasive Ayurvedic treatment of nasal polyps.

According to Ayurvedic perspective, Master Sushruta, while dealing with the diseases of the nose, devoted a separate chapter to Pratishyaya after explaining Nasagata Roga in detail. In general, the features of the disease are similar to that of chronic sinusitis in modern science.

“Srotasam Atipravruti” means “body channels hyperactivity” is the reason for Allergy as per 5000 years ago ancient Ayurveda principles. Any sort of over activity happening at these 13 internals and 7 externals body channels leads to the manifestation of allergies by exhibiting symptoms on various body tissues.

Symptoms of Sinusitis that is known as “Kaphaja Pratisyaya” is well brief in Sanskrit language. The above shloka stated that in Kaphaj Prathyaya- cough, anorexia, thickened phlegm, and itchy nose are the major symptoms.

In Ayurveda four types of Nasarsha (nasal polyps) – Vataja , Pittaja, Kaphaja and Sannipataja are described by Aacharya Sushruta among thirty one Nasagata rogas (one which affects nose ) and Aacharya Charaka has also mentioned in Arsha (hemorrhoids) chikitsa  about the fleshy growth appear on the nose similar to nasal polyp. As per Ayurveda, symptoms include:

With the objective of understanding the better pathogenesis, the author presents a case report.

The patient presented with the following symptoms:

For Nasal: Pratimarsha Nasya Karma with:

The allergic progression started due to inhalant allergens and other environmental factors in the present case. Due to weak digestive fire, the microbial activities in the stomach also get aggravated resulting in the formation of Aama Visha (difficult to digest products generated within the body) or toxin accumulation within the body so Dr. Gupta recommended the patient to take food which is alkaline in nature, stimulate digestions, maintain pH balance along with Ayurvedic treatment. 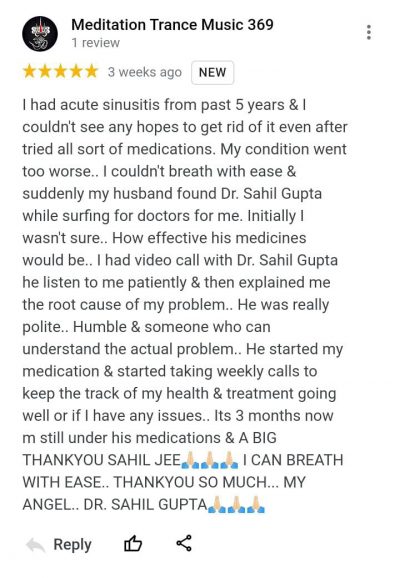 “I had acute sinusitis from past 5 years and I couldn’t see any hopes to get rid of it even after tried all sort of medications. My condition went too worse. I couldn’t breathe with ease & suddenly my husband found Dr. Sahil Gupta while surfing doctors for me. Initially, I wasn’t sure, how effective his medicines would be. I had video call with Dr. Sahil Gupta, he listened me patiently & then explained me the root cause of my problem. He was really polite, humble & someone who can understand the actual problem. He started my medication & started taking weekly calls to keep the track of my health & treatment going well or if I have any issues. It’s three months now and I am still under his medications. A BIG THANK YOU SAHIL JI. I CAN BREATHE WITH EASE. THANK YOU SO MUCH. MY ANGEL. DR. SAHIL GUPTA.”

Ayurveda believes in pacifying the tridoshas and cleansing the body by using unique treatment modalities. This treatment approach by IAFA along with changes in diet and lifestyle under the supervision of Dr. Gupta has made the patient symptom free by non – invasive method. Ayurvedic treatment of sinusitis and nasal polyps by IAFA helped in achieving a balanced physiology which regressed the size of nasal polyps. Thus, IAFA has created a new hope for the treatment of nasal polyps along with sinusitis. The combination of both external and internal medications helped in pacifying the vitiated doshas synergistically.