As the nose is in direct contact with the external environment, it is much exposed to many micro-organisms and pollutants present in the atmosphere. Due to pollution and a busy lifestyle, rhinitis is a common problem in the present era. Improper management of this stage leads to sinusitis (inflammation of the sinus mucosa), which may lead to chronic sinusitis. Once the sinuses are infected, improper management as well as poor dietary habits can lead the disease to a chronic phase.

In modern treatment, a wide range of antibiotics and decongestants are available for the treatment of sinusitis but these can provide relief in the initial stage to some extent. Once pus collection forms in the sinuses and it is not drained spontaneously, then only surgical intervention can help but these surgical interventions are associated with many complications. The frequent use of antibiotics also leads to the gradual development of drug resistance. Hence, there is a need for a treatment protocol that would help drain the sinuses, remove the pathology and promote immunity as well. In Ayurveda, Acharaya Sushruta has devoted a separate chapter of the disorders related to nasal allergies treatment. The present blog highlights the successful treatment of sinusitis of a 64 years female patient, resident of Trinidad and Tobago, twin island country (South American mainland)  through Ayurvedic intervention at IAFA® without any adverse effect. Various Ayurvedic internal and external procedures were administered to the patient by Dr. Gupta at IAFA®. The Ayurvedic treatment under the supervision of Dr. Gupta was found to be effective and without complications in the present study.

Changing lifestyles, rapid urbanization, increase in resistance to antibiotics, etc. are responsible for the increased prevalence of upper respiratory tract infections. The most common problem related to the upper respiratory tract is Pratishyaya which in later stages converts into Dushta Pratishyaya or chronic sinusitis. It is a common problem among all age groups and is a leading cause of hospital visits worldwide. This is characterized by tenderness over the sinus region, headache, nasal blockage, fever, etc.

Acharaya Sushruta, while dealing with the diseases of nose, devoted a separate chapter to Pratishyaya after explaining Nasagat Roga in detail. The clinical picture of sinusitis shows the predominance of Kapha and Vata doshas which can be alleviated by herbal formulations having laghu, tiksha guna and ushna virya.  Panchakarma should also be incorporated to avoid the recurrence.

According to the patient’s clinical history, she was having the following symptoms:

The treatment was followed according to the principles of Ayurveda under the supervision of Dr. Gupta. The Ayurvedic formulations that were selected have Aam Pachan (digestion of toxins) and dhatu agni deepana (digestive fire stimulating), Katu Rasa (pungent taste), laghu (light), ushna virya (hot potency), Vatakaphashamaka (Vata and Kapha pacifying), sroto shodhan (purify the channels), antibacterial, anti-inflammatory, anti rhinovirus and immunostimulatory properties. All these properties help to remove the pathology and also promote local immunity. Nasya was also prescribed as an external treatment. Through Nasya procedure, the drugs reach the Shringataka and from there, through different Siras, it spreads to other parts like Netra (eyes), Sirah (head) etc. and removes the morbid doshas.

Patient was given medication for one month on 23/02/2022. There was subjective improvement in the patient’s condition after the first month of treatment as congestion and nasal discharge were relieved to some extent.

After first follow-up on 11/04/2022, there was 50-60% improvement in the condition. So, the same treatment was administered for another one month. Another medication Brahmi Vati Rasayan Suvarnayukt was added in the above treatment plan which was advised to be taken 1 tablet twice a day.

So, the same treatment was continued for another one month to avoid relapse. The treatment continued for three months and the patient got significant relief. She was quite satisfied with the Ayurvedic treatment provided by IAFA®.

Here is a Happy Note from Our Patient: 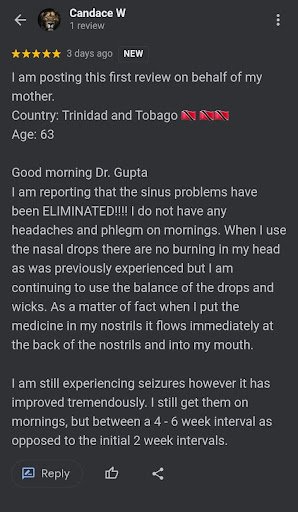 I am reporting that the sinus problems have been ELIMINATED!!! I do not have any headaches and phlegm on mornings. When I use nasal drops there are no burning in my head as was previously experienced but I am continuing to use the balance of the drops and wicks. As a matter of fact when I put the medicine in my nostrils it flows immediately at the back of the nostrils and into my mouth.”

So, it can be said that there is a successful treatment of sinusitis in Ayurveda as there is a major advantage of the Ayurvedic formulations for the patient as it provided significant relief and the patient can continue her day-to-day activities and rendered the patient a better quality of life. Thus, IAFA® is bridging the gaps between countries and bringing a convergence of science and traditional medicine together.

Ayurvedic management of sinusitis or any other allergic condition at IAFA® begins with an initial assessment by Ayurvedic experts to discern the primary dosha of any current imbalances. If you are seeking successful treatment of nasal allergies or other disorders through a safe and authentic approach, book an appointment for consultation and enjoy good health!