Allergic Rhinitis is considered a major nasal condition impacting a large number of people around the world and it is now becoming a global health problem. This disease is also known for its recurrence and chronicity. Allergic Rhinitis is an immune response of the nasal mucosa to the airborne allergens which involves symptoms like – nasal congestion, itching, sneezing etc. Modern medical treatment undoubtedly relieves symptoms but successful treatment of allergic rhinitis is not very much possible. Allergic Rhinitis can be managed successfully through the holistic approach of Ayurvedic treatment.  In Ayurveda, among Nasagat Rogas, Pratishyaya is the one which has been described by all Acharayas in detail. A chronic case of Allergic Rhinitis is presented in this article who has been treated successfully at IAFA by Dr. Sahil Gupta. The Ayurvedic treatment of Allergic Rhinitis at IAFA was aimed at pacifying aggravated Vata and Kapha doshas by using internal and external procedures. Significant improvement was noted after 10-15 days of treatment. The results were encouraging and the patient also gained resistance against allergens, repeated attacks and immunity is enhanced.

The hypersensitive reaction caused by the immune system of the body due to interaction with a particular substance or material or situation is known as Allergy. The harmless substance that causes allergy is called Allergen. The vast experience of IAFA proves that Food Allergy, Skin Allergy and Nasal Allergy are the most recorded allergic cases.

Allergic Rhinitis is classified as Vata – Kaphaj Pratishyay in Ayurveda.

The above shloka mentioned in Ayurveda explains the signs and symptoms of Vata Kapha pratishyay, as:

A 39-year-old Indian female residing in United States (USA) suffering with Allergic Rhinitis took online consultation from IAFA, India with the complaints of continuous sneezing, running nose, nasal irritation and blockage, watery eyes with irritation, palate itching with sore throat and mild headache with Post Nasal Drip from past 3 consecutive years. The symptoms usually present seasonally during spring to fall, usually worsen from June-July. During wake- up time in the morning, there is continuous sneezing for 1-2 hours which is suggestive of temperature change intolerances. As per patient’s clinical history, she is also having symptoms related to acute sinusitis and allergic asthma with shortness of breath occasionally.

a. Pratimarsha Nasya Karma: with

As the allergic progression started due to inhalation of allergens and other environmental factors in the present case due to which symptoms like nasal irritation with continuous sneezing was recurrent. Due to diminished Agni (digestive fire), Ama visha (difficult to digest products) generated within the body. So, Dr. Gupta at IAFA recommended the food that is alkaline in nature having properties like stimulating the digestive fire, pH balancing and enzymatic action balancing. 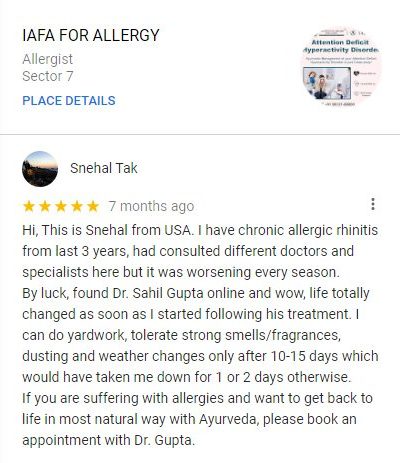 “I have chronic allergic rhinitis from last 3 years, had consulted different doctors and specialists here but it was worsening every season. By luck, found Dr. Sahil Gupta online and wow, life totally changed as soon as I started following his treatment. I can do yardwork, tolerate strong smells/fragrances, dusting and weather changes only after 10-15 days which would have taken me down for 1 or 2 days otherwise.

If you are suffering with allergies and want to get back to life in most natural way with Ayurveda, please book an appointment with Dr. Gupta.”

Though, Allergic Rhinitis is not a life- threatening disease but it significantly impairs a patient’s quality of life and productivity. The modern treatment of allergic rhinitis is not free from side effects despite the availability of newer and newer medications. At IAFA, the internal and external treatment of allergic rhinitis Ayurvedic treatment along with changes in diet provided a marked relief in the condition of the patient. External treatment therapy like Nasya has been used in Ayurveda since ancient times for the diseases of head and neck. The Ayurvedic medicines of allergic sneezing follow a holistic approach. Thus, this case study can open a new direction in Ayurveda inspired novel targeted drug delivery systems. If anyone suffering the same can opt for Ayurveda and consult with our health experts.