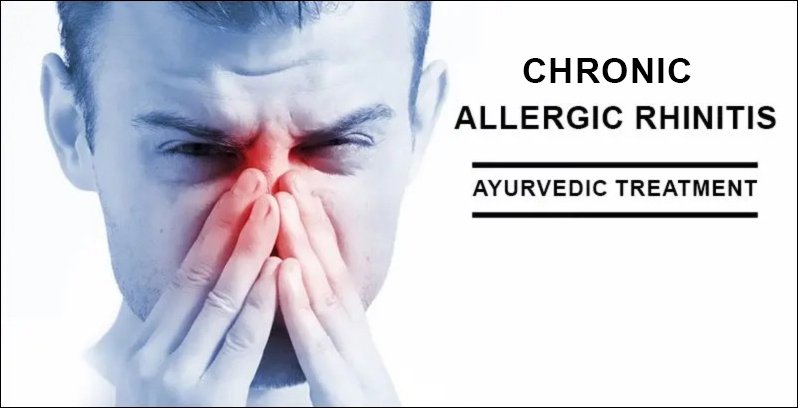 The word chronic means that the nasal inflammation is a long term, lasting for more than four consecutive weeks. Rhinitis is a medical term for the inflammation of inner lining of the nose. Chronic allergic rhinitis is different from acute rhinitis, which only lasts for a few days or up to four weeks only.

What are the Symptoms of Chronic Allergic Rhinitis?

The main symptom of chronic allergic rhinitis is nasal congestion. The patients may have feeling to blow the nose all the time, but little mucus actually comes out. This is because congestion is not caused due to mucus, but rather because the nasal passages are swollen. Other symptoms are:

Concept of Chronic Allergic Rhinitis – According to Ayurveda

According to Ayurveda, it is caused due to the imbalance of kapha and vatadoshas. The formation of ama (toxins) affects the rasa and rakta dhatu which leads to the manifestation of pratishaya. Wrong diet which has antagonist properties such as taking fish with milk, desi ghee with honey, ice cream after night meals, taking milk with fruit juices etc. for a long time leads to chronic allergy rhinitis.

According to Ayurveda, chronic allergic rhinitis is caused due to the following factors:

Medicated oil having snigdha property is helpful in reducing itching in nasal passage.
In addition to ayurvedic medicines, nasya with medicated oils is also a very effective treatment for chronic allergic rhinitis.

Some of the Home Remedies for Chronic Allergic Rhinitis

Take a cup of water and add ½ teaspoon of licorice root powder, ¼ teaspoon of black pepper powder, 1.5 teaspoon of freshly grated ginger and 10-12 basil leaves. Boil this water until it is reduced to half. Drink this water when lukewarm in the morning and evening.

Take 1 cup coriander seeds and lightly roast them, ¼ fennel seeds, 1 tbsp black pepper, ½ cup cumin seeds. Grind the above ingredients finely and store them. Make herbal tea by boiling ½ cup milk and ½ cup water. Add the above mixture and jaggery powder according to taste. Drink this tea every morning.

Chronic Allergic Rhinitis causes a great discomfort to the sufferers but treating it an Ayurvedic way removes the root cause and increases immunity. Home Remedies for Allergic Rhinitis start showing results within a few days. Thus, maintaining a lifestyle balance along with Ayurvedic treatment can be a lasting cure for chronic allergic rhinitis.